Army Bases were set up in the early days of the apocalypse as the army tried to spread in different directions in an attempt to get the situation under control. The army was overwhelmed by the virus , causing these bases to become abandoned, leaving weapons and ammo behind. The army also dotted the perimeter with land mines, meaning that caution must be used when approaching an Army Base. (Less so I’d you have read urban combat books (specifically the one with landmines))

As of Alpha 14.4 there are two types of Army Bases, Army Recon Camps, and Army Barracks.

All Army Bases, outside of 7 day hordes, are the only places where Fallen Soldier Zombies are found.

As of A19, there are main loot rooms to military installations but vary in loot (from guns safes to mixed crate types)

The Army Recon Camps were introduced in Alpha 6. They are a small collection of tents surrounded by a small sandbag wall and Barbed Fence Wire. Their perimeter is dotted with land mines which will explode if walked over. Located in one of the tents will be a Munitions Box. 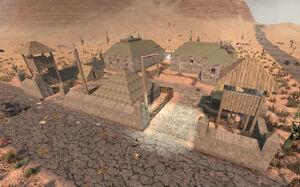 An Army Barracks in a Desert biome.

The Army Barracks was introduced in Alpha 14.4. It's composed of two barracks structures, a couple of tents and two guard towers. The walls are concrete, making this a good location for a starting base. One or Two munitions crates , a working stiff, shotgun messiah and sham way crate and a gun safe can be located in the military base. The Army Barracks is the best type of military base to settle in and fortify, as the fenced off entrance is easy to break through, even with a stone axe in the early game, just be careful when clearing the area for the first time.

There are currently three Army Recon Camps and one Army Barracks in Navezgane:

Army Bases only spawn in rural areas or the wilderness.

There three variants on the Army Recon Camp and one Army Barracks.

The following are images of Army Recon Camps in Past Alpha versions.