7 Days to Die Wiki
Register
Don't have an account?
Sign In
in: Furniture, Decor/Miscellaneous, Craftable items, Pages in Need of Confirmation
English

Revision as of 19:47, 11 March 2017 by @DeletedUser40400896 (talk | contribs)
(diff) ← Older revision | Latest revision (diff) | Newer revision → (diff)
Edit
Some items' or groups' chance to drop changes according to the player's gamestage. Here you can see those values for any gamestage you want using the little box below. Just type the gamestage you want in the box and press the Apply!-button. The values should change immediately, if the chance is different.
Current game stage: 1

The Cooler can be crafted at a Workbench. 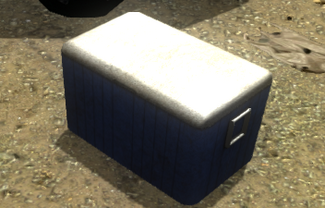 A Cooler that is placed by a player, as of Alpha 11, will go to an untouched state when running on a SMP server, clearly a bug, as random items will be found inside of a player placed Cooler[?].