7 Days to Die Wiki
Register
Don't have an account?
Sign In
Advertisement
in: Stubs, Locations, Biomes,
and 2 more
English

Edit
watch 02:46
The Quarry - The Loop
Do you like this video?
Play Sound
This article is a stub. For more information on what defines a stub, see Template:Stub.
You can help 7 Days to Die Wiki by expanding it.

The Desert Biome is found in the south-east corner of the Navezgane map. It's an immense sprawl of terrain completely covered in Sand with patches of Clay and Sand, with many Saguaros present.

This Biome only has Rabbits as living creatures, and water is scarce. Unlike other biomes, the Sand goes all the way down to bedrock, rather than turning to stone at some point. It is possible to mine Sand, Iron Ore, and Oil from a Desert, the Iron Ore and Oil only appear at least 23 meters underground.

With the temperature survival system that A13 introduced, starting off in the Desert can be rough. The temperatures get very hot during the day and cold at night. It is important to note that Yucca Juice now has a cooling effect that will keep you cool in the Desert. Crafting a Plant Fiber Hat or trying to find a Cowboy Hat in loot will also help you stay cool in the hot environment. Food and drink, however, are plentiful, since you can obtain food resources such as the Yucca Fruit from Saguaros (tall cactus) and Yucca Juice from Yucca Plants. Other common resources include Desert Shrubs, Prickly Pears, Brown Grass and Driftwood. Medical resources can also be obtained here, since Aloe Plants are plentiful and can be used to create Aloe Cream or First Aid Bandages.

Wood is harder to come by in the Desert because of the lack of trees. Bases can be constructed out of Adobe Peach Blocks or Adobe White Blocks instead of the Wood Frames of many starter bases. These are cheap to build, and upgrade straight into Concrete Blocks.

There are also plenty of small scrapyards where many destroyed cars can be found among the saguaros, as well as Corpses. Bags such as the Duffel Bag also seem to spawn more often in large groups of saguaros. Desert caves are a place to find the Apache Artifact Chest 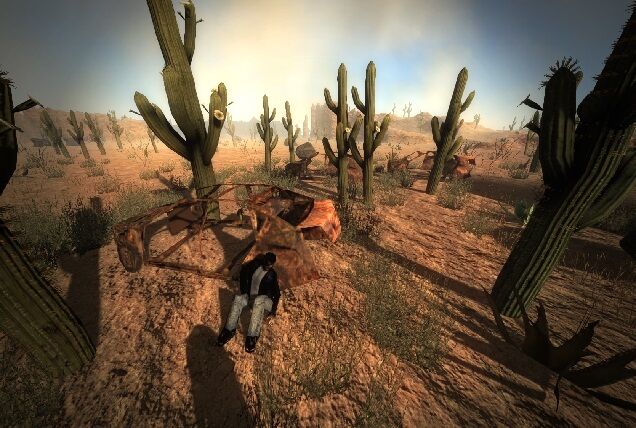 Even though deserts are known for being huge isolated places, there are many locations and buildings in the desert. There are many Gas Stations in this Biome; it's very common to find abandoned Campsites, water towers and barns as well. If the player follows roads they might be able to find Ghost Towns. These towns are "Wild Wild West" themed and are completely overrun by zombies, but they contain plentiful loot. The player may also be able to find shops such as Gun Stores.

As of Alpha 16 a city has been added to the Desert. The addition of Departure has made the desert a much more viable living place and a destination worth visiting.

In Navezgame the Desert holds an Autoshop and a Hotel.(A13) The hotel doesn't spawn in the Random World Generation maps yet.