Difference between revisions of "Farming"

From 7 Days to Die Wiki
Jump to: navigation, search

Some items' or groups' chance to drop changes according to the player's gamestage. Here you can see those values for any gamestage you want using the little box below. Just type the gamestage you want in the box and press the Apply!-button. The values should change immediately, if the chance is different.
Current game stage: 1

Farming is the process of planting, growing, and harvesting the various Trees and Plants found in 7 Days to Die. This process allows the player to set up a farm and sustain the production of certain foods, items, and resources.

Use your fists or any tool to harvest crops. After you have bought the required level in the Living off the Land perk or found a schematic you can craft seeds from harvested crops. Craft Farm Plots and plant seeds on Farm Plots using the secondary action and increase your harvesting yield through buying more levels of the perk.

Tree seeds can be obtained by fully-harvesting (felling) a mature tree. Planting tree seeds requires only the appropriate seed and an open area of land.

Crop seeds can be found via Looting or for purchase from Traders. You can craft seeds for flowers at Level 1 of Living Off The Land (Perk), berry & vegetable & mutated seeds after unlocking Level 2.

Crop seeds can only be planted in a Farm Plot (with the exception of Mushroom).

Plants (with the exception of Mushrooms) also require natural light so that they can grow. This means that plants need to be outside, or have some method of receiving natural light. A chimney will work.

Various types of blocks will let light through. This is defined by either the shape of the block, or the material it is made from, or a specific value that is specified. The light levels have a range of 0 to 15, 0 being completely dark and 15 having access to full sunlight. A block with a light opacity of 1 will reduce the amount of light that the blocks below it receive by 1 (assuming it is the only source of light, as in a tunnel to underground). So Bulletproof Glass will reduce the light below it from 15 to 13, still plenty of light to grow plants.

The amount of light that a block receives will also reduce by 1 with the vertical distance from a light source. A block that is over six meters from a natural light source will not receive any light.

Trees will initially appear as small saplings, which only yield minimal Grass when harvested. Trees slowly grow and mature in stages until a maximum size is reached (determined by the soil type in which the tree was planted[?]).

Plants initially appear as seedlings and slowly mature over time. Inspecting a plant by aiming your crosshairs at it will display its growth stage: seedling, growing, or (type) plant. Only fully-grown plants can be harvested. If a seedling or growing plant is harvested, the seed for that plant is recovered in your inventory.

Trees are harvested for wood via chopping. This can be done with bare hands if necessary, but is more efficient using tools (Axe). A mature tree that is fully harvested will also provide 2 tree seeds once felled.

Plants are harvested by left-clicking any mature plant. Harvest yield is equal when using bare hands vs. any tool, and is only determined by the Living Off The Land (Perk). Once a player-placed plant is harvested, it reverts back to its seedling stage in its plot. Plants found growing organically on the map are simply destroyed upon harvest. If a seedling or growing plant is harvested, the seed for that plant is recovered in your inventory. Using auger or chainsaw are the fastest way to harvest crops with some exceptions, second fastest way is using a knife. which benefits extra speed from Flurry of Blows (Perk)

Wood yields vary based on the size of the tree. Below are yields for felling fully-mature trees (i.e trees with 1200 durability when felling them). Trees can be planted on any soil based ground (No Farm Plot required) and yield 150 wood per tree regardless of tool used. The wood yield is effected by Mother Lode. Fully-mature trees will always yield 2 tree seeds.

(Alpha 16) The video guides you through how to farm trees and crops, the effect of tilling and fertilizing the soil, and basics of underground farming and light. It also touches on the different crops and what they are used for. 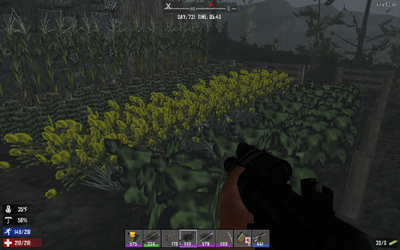 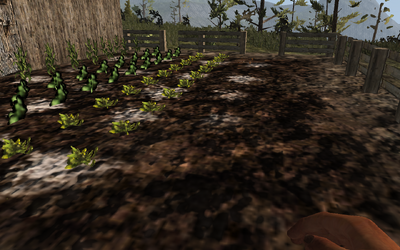