For information about maps rather than the interface for maps, see Map. 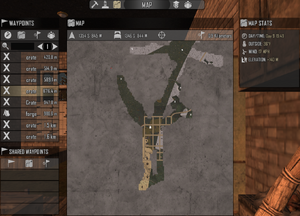 Here the player has marked several waypoints on the map for personal reference and has no shared waypoints.

at the top of the menu while accessing one of the other main menus such as Character Menu, Looting Menu, or Crafting Menu.

From the map menu the player is able to manage waypoints (personal and shared) as well as view the map and access map stats, such as the current day and time, outside temperature, wind speed, and elevation.

The four waypoint options are shown at the top of the pane. Waypoints are listed below, with "forge" being the highlighted waypoint.

The menu for creating waypoints with all possible icons shown.

The left-most pane of the menu lists any waypoints the player has created as well as options to remove and search through waypoints.

on the far-left, you will be able to track a waypoint. Tracking a waypoint places it in your compass regardless of your distance from the waypoint, allowing you to navigate straight to the waypoint. You can track multiple waypoints simultaneously. The compass icon

is a toggle, so one click turns on tracking for the highlighted waypoint and another click turns off tracking. Which waypoints are being tracked are saved after logging off of a server and out of the game.

The second icon from the top left, which looks like a semi-folded map

will show on the map whichever waypoint is highlighted. The map will be centered on the highlighted waypoint.

The third icon from the top left

And the right-most icon

will share a waypoint to either your allies or everyone.

Once you have waypoints added to the map, you then are able to see them represented in your compass, at the top-center of the default screen.

As you get closer to waypoints, their icons in the compass get bigger and more opaque. This provides immediate information regarding how close you are to the waypoint, without having to stop and open the map. Quick waypoints will not change transparency with distance.

On the left of the compass is a red flag representing a quick-save waypoint. At the center is a bright "X" waypoint, and to the right is a smaller dimmer "X" waypoint that is further away.