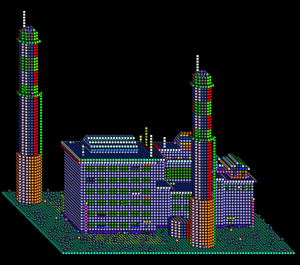 factory_lg_01.tts prefab file version 4. This image was made with a python script, giving random colors to each block. 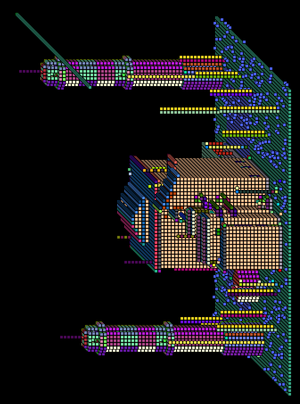 factory_lg_01.tts prefab file version 8. This image shows the difference between version 4 and 8.

Prefabs are pre-built world objects such as buildings, doors and signs that are scattered around the map. They allow developers and users to make maps more easily because they can be copied, pasted and reused any number of times.

The Prefabs in Navezgane are reflected in the file Data/Worlds/Navezgane/prefabs.xml. This file contains a list of every prefab in Navezgane including their coordinates and rotation.

For information on how Prefabs are placed outside of Navezgane see Random World Generation.

The path to all of the default prefab files is Data/Prefabs/.

Each Prefab has between four and six files associated with it.

Files ending in .blocks.nim associate block ids with their in-game names. These ids are referenced in the TTS file. By changing a block name in this file all blocks referenced by that id in the TTS file will be changed. This feature was introduced in Alpha 17.

The purpose of files ending in .ins is unknown. Not every prefab has an INS file. They were introduced in Alpha 17.

Prefabs optionally have .jpg thumbnail images used to preview the prefab in the in-game editor. This was introduced in Alpha 17.

Mesh files were introduced in Alpha 16. They end in .mesh and are not present for every prefab. It is not yet known what their purpose is.

Files ending in .tts contain the voxel block data for each prefab. They are binary files, and the format is explained below for the currently used versions. All numbers are in little endian.

Every prefab has an XML file ending in .xml that stores attributes about the model such as what Biome, Zone and Township they can spawn in.

As the game has been updated, the prefab format has changed slightly. These changes are reflected in the version number found in the header of each prefab file.

Guide how to import a prefab into a new/existing game world.