The Sedan is a car that can be found scattered on or alongside streets or roads, or parked in front of certain buildings, such as gas stations. It can't be driven, but it can be looted or harvested, or used for Storage.

A Sedan can be found in three stages of (dis)assembly. By using a Wrench, it can also be harvested through each stage, until it is completely harvested and disappears.

When opening Sedan you will get 0 - 1 items. Each item is one of the items in the list underneath, with chance indicating how probable it is to get a certain item. Note: It is possible to get multiple instances of the same item, if that item was chosen more than once. 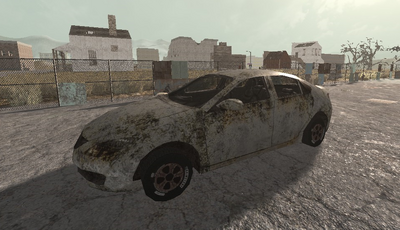 A Sedan looks like a blue, red, black, grey, white or yellow car that appears almost undamaged. It can be looted, harvested, or used for storage. When a Sedan is completely harvested, it becomes a Damaged Sedan. 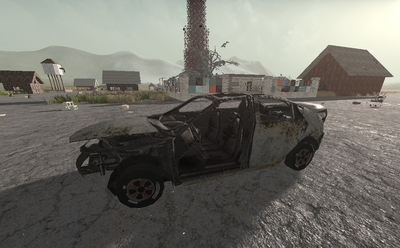 A Damaged Sedan looks like a blue, red, white or yellow car with some of its exterior panels missing. It can be looted, harvested, or used for storage. When a Damaged Sedan is completely harvested, it becomes a Destroyed Sedan.

(Note: It is possible to get both the Engine and the Lead Car Battery from one Damaged Sedan) 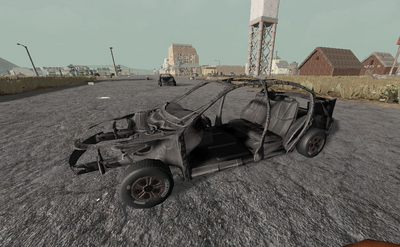 A Destroyed Sedan looks like little more than the frame of a car. It has no "label" when you look at it, and it can't be looted or used for storage. When a Destroyed Sedan is completely harvested, it disappears.

All types of Sedans are explosive, and can be detonated by any block-damaging explosion, such as Rockets, TNT, Auger, or Gas Barrels. They leave a large crater behind.