Settler Play-style is a term for players that rely upon building a well-fortified base that can be effectively defended and utilizing game features like farming, mining and forging to acquire a steady source of food and resources to become relatively self-sufficient, and is the complete opposite of the Nomadic Play-style, which encourages constant movement, scavenging and hunting. The Settler Play-style relies more on choosing a good location for constructing a large fortress based on the abundance of surrounding resources and its ability to be easily defended, and requires construction of defenses and manipulating available resources to their greatest utility. The Settler Play-style can be more easily stretched into the late-game than the Nomadic Play-style, though it requires more proficient use of time-management than the latter.

As with the Nomadic Play-style, this guide is written for the default map, Navezgane. Just as with the Nomadic Play-style, the Settler Play-style can be achieved on a randomly-generated map, but is slightly more difficult because the player will lack a pre-existing knowledge of the map. The Settler Play-style is however easier to utilize on a generated map because it does not require the player to move extensively about the map after finding a good location for the player's primary base. 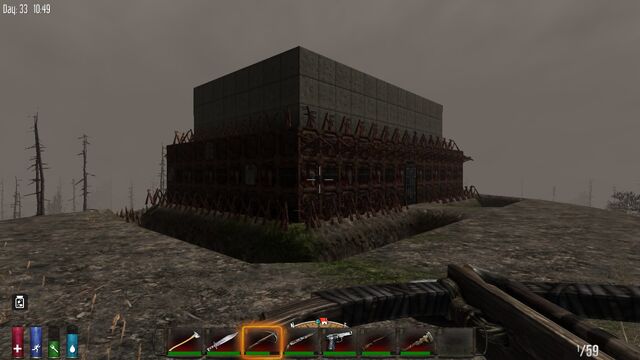 The Settler Play-style is defined by the construction of a single, central home-base from which the player will perform all day-to-day survival tasks like farming and crafting, as well as defend against hordes. During the day, the player will mine, farm and craft to produce the necessary resources to maintain their base, occasionally making excursions out into the map surrounding them to find additional supplies and necessary things like skill books. During the night, the player will confine themselves to the interior of their base or no farther than the immediate exterior, relying on strength of arms and their constructed defenses to protect them. The Settler Play-style player tends to throw away less resources than the Nomadic Play-style player, opting instead to stock-pile all resources they acquire in storage containers inside their base in anticipation of a shortage.

Construction is perhaps the most important aspect of the Settler Play-style besides simply surviving. The Settler constructs a single large base and continuously fortifies it and builds defenses surrounding it to stop any incoming hordes or hostile players, staying at this central fortress until it becomes absolutely necessary to vacate.

The Settler spends most of their time trying to acquire the necessary components to obtain the strongest building materials possible such as Reinforced Concrete and effective defenses against attack such as Wood Log Spikes and Barbed Fence Wire.

There are many strategies a Settling player can use when constructing their central fortress.

One of the most important aspects of choosing a location to build a central base is the defensibility of the spot. Another important factor is its proximity to resources. The following factors generally affect this aspect of a location:

There are many different ways a player can design their fortress. However, there are a few good practices and tips a player should follow when planning out their base. 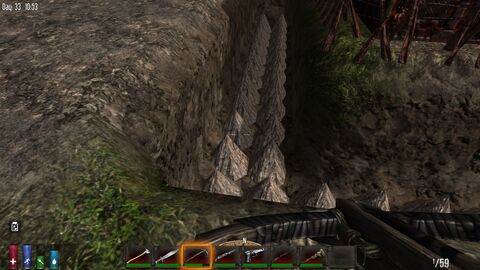 If a Settler wants to withstand a horde of enemies, building appropriate defenses is absolutely essential. Well built defenses should stop zombies from coming in direct contact with the walls of a Settler's fortress in large numbers. The following are some tips on building effective defenses for one's base:

Settling players must try to obtain the best possible tools and weapons to construct the necessary components of their base and effectively defend it. The following lines explain the usefulness of each tool or weapon for a Settling player.

Weapons are categorized into three types: melee, ranged and explosive.

Melee weapons, while being generally dangerous to use against large amounts of enemies, are good for use by a Settling player if the player can construct their base in such a manner as to funnel the flow of enemies into a tight channel or corridor, allowing them to quickly kill large amounts of zombies without the possibility of being surrounded. In both Survival SP and Survival MP, however, firearms still maintain a higher level of effectiveness and safety than melee weapons. Melee weapons do not require ammunition, but this is a more important factor to the Nomadic player than the Settling player as the Settler tends to have access to much greater amounts of renewable ammuntion.

Besides the Wooden Bow and Crossbow, ranged weapons are mainly firearms. Ranged weapons are safer to use than melee weapons, and provide a higher kill-rate. Even though most ranged weapons are firearms and thus require ammunition that are not nearly as easy to produce than the Crossbow Bolt, this is not a problem for the mid- to late-game Settling player because by this point they should be capable of producing their own ammunition by mining, forging and crafting the necessary components. In the early-game, however, ammunition should be used sparingly just as with the Nomadic player.

Explosives are all items, crafted or otherwise, that produce an explosion damaging all blocks and/or entities in a certain surrounding radius. Explosives are very effective at defending a base, but should be used with caution as they can damage the structural integrity of a Settling players base, as well as be lethal if the player is caught in the blast radius and is unable to escape in time.

The Settler Play-style is largely based around the concept of acquiring and stockpiling as many resources as possible, primarily food and clean water, weapons, ammunition and medical supplies. Some of the more basic of these resources can be obtained through scavenging. However, the ultimate goal of the Settler Play-style is self-sufficiency, making this type of resource gathering unsuitable for the Settler, who must instead find other, more renewable methods of production.

The most obvious choice for food production for the Settler Play-style is Farming. This is currently the only renewable method of food production in 7 Days to Die as the product can be reduced back into seeds through crafting. Thus, once the player has established a sufficient farm, food becomes a non-issue.

Since there is no way to "produce" water in the game, the Settler should always choose a location to construct their base that is sufficiently close to a source of water such as a lake or a river. Besides that, there is not much more to ensuring an adequate supply of water for the Settler.