Edit
watch 02:56
Raise a Floppa - The Loop
Do you like this video?
Play Sound

There are four Shotgun Messiah Gun Stores in Navezgane and are also randomly placed in Random World Generation. They contain Shotgun Messiah Crates from which various Weapons can be looted as well as parts, ammunition and mods. There are also Beverage Coolers, some Cupboards and File Cabinets in the shop area. In the back of the building there are Toilets, a storage area and an office with a Wall Safe or Gun Safe.

As of A17, you can only find weapons in shotgun messiah crates (Also, besides the obvious, you can click weapons and go to firearms) 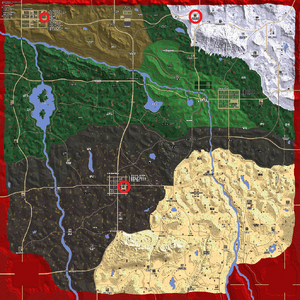 It can spawn anywhere depending on your game name or Seeds, but usually you will find them in cities. They can also sometimes be found by themselves on roads.

There are 2 types of Shotgun Messiah Gun Stores.

The video below shows the coordinates to the Shotgun Messiah Gun Stores in Navezgane, demonstrates the types of loot containers and some loot as of alpha 13.8