Information courtesy of Gazz from the official forums[]

Actually there isn't anything beyond the basics. Structural Integrity in this game is simple.

Vertical stability is infinite. You can stack 250 stone, tungsten, or concrete on a single Wood Frames. (then you hit the ceiling of the game) 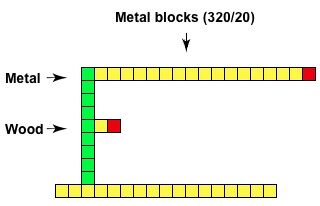 Some examples with all wood[] 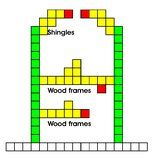 The Game Messing With You[]

WARNING: A lot of this has changed since Alpha 13 and may not be relevant anymore.

Structural Integrity describes how many blocks of one material can be used to build an unsupported structure.
One example for such a structure is a horizontal beam. It is important that the player uses the same block for the base as for the beam itself.
There are some limitations to this.

Contrary to popular belief, Metal Trussing and other metallic blocks do not act differently than, for example, stone blocks. Metallic blocks mostly have a Max Load of 320 and a Mass of 20; what would make a structural integrity of 16, but due to the limitation at 15 it seems like structural integrity for metallic blocks is 15 and they break partially. If the player builds a plateau 4x4 instead of a beam he reaches the 16 blocks maximum and may walk on this plateau. Add a 17th block anywhere and the whole structure collapses.

In order to calculate the structural integrity, divide Max Load by Mass of the block and round down the quotient.

This is the number of blocks you can add at each side of the block. To get the support of a side, a platform has to connect to it. I.e. a wooden frame platform of 4x4 blocks has to connect to three sides of the base, to get support for up to 18 blocks. A platform of 3x4 wooden frames only needs to connect to two sides of the base, because that would be enough to get support for 12 blocks. Not counting in these platforms is the base itself as it does not need any support (obviously), making the effective platform 19 / 13 blocks big. Those platforms do not have to be a rectangle.

If you use different materials, the number of unsupported blocks is calculated using the following formula

The video below explains the physics of mass and max load for various building materials in detail as of alpha 15.